Two newspaper reports on Trump’s April 6 missile attack on Syria included commentary from cultural anthropologists. An article in The Providence Journal (Rhode Island) offered several points of view on the effectiveness of the attack from experts in Providence, Rhode Island including that of Catherine Lutz, Thomas J. Watson Jr. Family Professor of Anthropology and International Studies at Brown University: “The launch of 59 Tomahawk missiles is not only a major act of war that threatens to have killed as many people as the recent heinous chemical attack, but it is in violation of the War Powers Act…The financial cost is not insignificant, either: at an estimated $1.4 million each, that makes for a total of $83 million that might have been used to assist the refugees of that war rather than to accelerate it.”

In The Press Republican (Plattsburgh, New York), James Armstrong, professor of anthropology at the State University of New York Plattsburgh commented that the attack was not the best way to effect a positive outcome: “The Syrian situation is so complicated, you can never be sure what kind of reaction your action will produce.”

who has Trump’s ear?

The Tehran Times carried an interview with cultural anthropologist William Beeman, chair of the department of anthropology at the University of Minnesota. The topic was: who is shaping Trump’s foreign policy? Beeman comments that “Both Bannon and Miller are, in my personal opinion, extremely dangerous ideologues in a government where the president is deeply inexperienced and impressionable…Bannon and Miller seem to be the most influential people. Many of Trump’s cabinet appointees seem to be peripheral. For example, Rex Tillerson, the new Secretary of State not only seems to be almost absent from policy decisions, he has not been able to appoint a deputy, and the budget for the Department of State seems to be about to be reduced by 30% or more. This is unprecedented in U.S. history. Outside of Bannon and Miller, President Trump seems to be listening to military generals.”​ 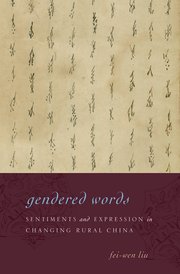 OZY magazine carried an article about Nüshu, a secret script used by women in Hunan Province, China. It started as a simple way to communicate and later became “a log of a woman’s private torment and misery. Women would often weep while writing the script, expressing fears about arranged marriages, the anguish of leaving one’s family and all of life’s misfortunes.” Fei-wen Liu, anthropology research fellow at Academia Sinica in Taiwan and author of Gendered Words: Sentiments and Expression in Changing Rural China, says that Nüshu was meant to be written in verse and sung or chanted aloud: “The core of Nüshu are feelings of misery and bitter experiences.” It provided a rare window into the everyday misgivings of rural daughters, wives and mothers as they transmitted life lessons on how to survive in a society that was harsh to women.  “Nüshu was about sisterhood,” and they called themselves “sworn sisters,” using Nüshu as “a way to bind them together.”

The Montreal Gazette reported on the launch of a new book by Homa Hoodfar, professor emerita of anthropology at Concordia University in Toronto. Publication was delayed by a year because of her imprisonment in Iran on specious allegations that were eventually dropped. The book, an edited collection, focuses on how women fighting for their rights in sports extends into the political arena. IT was originally planned to appear before the run-up to the 2016 Olympics as a contribution to the discussion about women in sport accompanying the Rio Games. Hoodfar commented that there are many parallels between the sports arena and the political sphere when it comes to women negotiating their rights. In the Muslim world, women have often had to fight just to be able to participate in sports.  In Iran, she said, women pushed back against the notion that it was “un-Islamic” for them to play sports by arguing physical activity is a part of healthy living, “and taking care of health is everyone’s responsibility because health is a gift from God.”

take that anthro degree and…

…become a professor of religion and Middle East Studies. Amira Mittermaier is an associate professor in the Department for the Study of Religion and the Department of Near and Middle Eastern Civilizations, with a cross-appointment to the Anthropology Department, at the University of Toronto. Bringing together textual analysis and ethnographic fieldwork, her research has focused on modern Islam in Egypt. Her first book, Dreams that Matter: Egyptian Landscapes of the Imagination explores Muslim practices of dream interpretation, as they are inflected by Islamic reformism, Western psychology, and mass mediation. Professor Mittermaier’s current book project, tentatively titled The Ethics of Giving: Islamic Charity in Contemporary Egypt, examines different Islamic modes of giving in post-revolutionary Egypt. Mittermaier provides opportunities for student supervision in areas such as modern and postcolonial Islam, Sufism, anthropological approaches to religion, and ethnographic method and writing. She has a B.A. from the University of Michigan (major unspecified) and an M.A. and Ph.D. in socio-cultural anthropology from Columbia University.

being a woman archaeologist

The Lake County News (California) interviewed archaeologist Seetha Reddy in honor of International Women’s History Month which was in March. Reddy, president of Reddy Consulting, commented:
“In terms of role models, there are several women who I hold in great regard and respect – of particular mention are Dr. Diane Gifford Gonzales (UC Santa Cruz), and Dr. Kathleen Morrison (University of Pennsylvania).  These women have been active in fieldwork and laboratory research, and have demonstrated how women make valuable contributions to the field while balancing other aspects of life.”

DNA and the First Americans

The Columbus Dispatch (Ohio) reported on recent DNA findings about the first peoples of the Americas published in the American Journal of Physical Anthropology. Biological anthropologists Connie Mulligan, of the University of Florida, and Emoke Szathmary, of the University of Manitoba, consider how genetics informs current understandings of the population history of the Americas. In addition to describing the DNA findings, the authors address the perspectives of American Indians on genetic research as it affects their identity. Mulligan and Szathmary suggest that the use of the term “migration” to describe the initial movement of peoples from Asia into the Americas can be interpreted to imply that indigenous Americans are simply another immigrant population with no special rights to the lands their ancestors were the first to discover. They suggest dropping the word “migration” to describe a process that involved “occupation over several millennia of a consolidated Asian-American land mass.

The St. Louis Dispatch (Missouri) reported on changes in the U.S. birth rate including the fact that women in their 30s are having babies at the highest rate since the 1960s. Otherwise, the population is generally stagnating. In Missouri, the number of births to women in their 30s increased 17.3 percent, while births among other age groups dropped by 18.4 percent. The article included commentary from biological anthropologist Sarah Lacy, assistant professor at the University of Missouri-St. Louis. She points out that the population of Missouri has gotten older and whiter than in other parts of the country that have added more Hispanic immigrants. “If the state is getting older, you are already pushing the fertility numbers back because younger people are living elsewhere.”

The pros and cons of parent-child co-sleeping (usually glossed as mother-child co-sleeping) are matters of ongoing debate among scholars and regular people. A father recently posted on social media a photo of his two children sleeping with their mother: it went viral. A CBS article on the topic quotes biological anthropologist James J. McKenna, professor of anthropology and the director of the Mother-Baby Behavioral Sleep Laboratory at the University of Notre Dame. McKenna, a supporter of co-sleeping, says statistics and warnings against co-sleeping shouldn’t be used to scare parents: “You have to go out of your way to make [co-sleeping] dangerous…No matter how many warnings or misrepresentations of inherent dangers moms and babies find themselves… Babies have always slept and always will sleep next to their mothers.”