Is voting “sacred” in India? 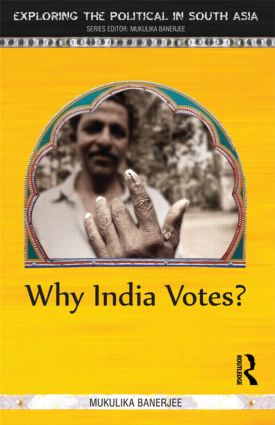 Mukulika Bannerjee, associate professor of social anthropology at the London School of Economics and director of the South Asia Centre, published an op-ed in The Hindu (India) drawing on her book, Why India Votes. She writes: “Indians clearly like to vote. Evidence from the ongoing Assembly elections shows that turnouts are above 80 per cent…Statistics show a steady rise in the turnout figures over the last three decades in several parts of India. The gap between women and men voters has also steadily reduced and in some States female voters outnumbered males. But what does this enthusiasm for voting actually signify?” She goes on to explore this question.

…work in the U.S. government. Susannah Fox is the Chief Technology Officer in the U.S. Department of Health and Human Services. She previously worked for the Pew Research Center and the Robert Wood Foundation. Fox has a B.A. in anthropology from Wesleyan University.

…be a journalist and filmmaker. Elijah Mackenzie is a contributing editor to Broken Sidewalk and a producer/director/editor at KY Place. He has held several previous positions related to journalism He also works as a program aide at the House of Ruth in Louisville, Kentucky, an organization that works with victims of intimate partner violence. Mackenzie has been active in public service in Louisville for several years, including a stint with AmeriCorps. He has a B.A. in anthropology and communication from the University of Louisville.

…become a store manager. Margaret Sole is the manager of Madison, a women’s clothing store, in Malibu, California. She has a B.A. in anthropology from the University of California Los Angeles.

…become a sculptor. Antony Gormley is a renowned British sculptor with many exhibitions and several permanent installations. In an interview, he comments: “My work is about trying to bear witness to the collective, subjective experience of being embodied.” He has an undergraduate degree from the University of Cambridge in history, archaeology, and anthropology.

… become an artist. Sam Stang, of Augusta, Missouri, is a glass maker. His pieces include bowls, platters, pitchers, and ornaments. His work has been widely exhibited, and he has been a visiting instructor around the U.S. He has a B.A. in anthropology from Washington University in St. Louis.

The New York Times reported about ongoing excavations and reconstruction of the gardens and orchards at the home of the poet, Emily Dickinson, known as the Homestead. The work is being carried out under the direction of the Emily Dickinson Museum. The team leader is Kerry Lynch of Archaeological Services at the University of Massachusetts, Amherst.

A city beneath a lake

Underwater archaeologists are excavating the submerged city, Naukratis, which was established by the Greeks as a trading port in the Nile delta around 620 B.C.E. The British Museum work is under way, and findings will be part of an exhibition at the British Museum. A reporter from The Guardian visited the site and spoke with several of the archaeologists involved in the research: Ross Thomas, who is directing the dig; Ben Pennington, a geoarchaeologist who, with Egyptian trainees, is sinking an augur below the surface in order to learn about the area’s environment; Eleanor Maw, who is in charge of a team surveying fields using the technique of magnetrometry; and Alexandra Villing, who is analyzing pottery shards. Naukratis has been partially excavated before, first by the archaeologist Flinders Petrie in the 1880s.

As reported in The Independent, a Canadian student used Google maps and other sources to discover what he claims is a lost Maya site, though scholars are skeptical. William Gadoury, from Quebec, compared maps of 22 star constellations known to the ancient Maya with Google Earth images of Mexico’s Yucatan peninsula. He found that the positioning of 117 known Maya cities corresponds to the patterns of the constellations, with the biggest cities matching up with the brightest stars – a link no one else has made. Then he investigated a little-known 23rd Maya constellation. Using satellite images he found on the web and photographs sent to him by the Canadian space agency, he found what look like the remains of a Maya city, located where the constellation suggests it would be. One of the most outspoken critics is David Stuart, professor of Mesoamerican Art and Writing at the University of Texas at Austin. Also critical is Thomas Garrison, assistant professor of anthropology at the University of Southern California, who is quoted as saying: “I applaud the young kid’s effort. However … in this case, the rectilinear nature of the feature and the secondary vegetation growing back within it are clear signs of a relic milpa. I’d guess it’s been fallow for 10-15 years. This is obvious to anyone that has spent any time at all in the Maya lowlands.”

According to reports from BBC News and other media, underwater archaeologists working in Florida have analyzed findings that add to the demise of the Clovis-first model of human occupation in the Western Hemisphere. Stone tools and bones from a butchered mastodon, found at the bottom of a river indicate that humans lived there and made a meal of a mastodon 14,550 years ago. This date is more than a millennium earlier than humans were thought to have settled the south-eastern U.S. Findings are reported in the open access journal Science Advances. The mastodon tusk that is the centerpiece of the Florida excavation was first found and dated in the 1980s, but the discovery gained little traction because of the power of the Clovis-first model. Jessi Halligan, lead author of the study and assistant professor of anthropology at Florida State University, is quoted as saying: “[It] was an impossible date for the scientific community to accept at the time, because it was well accepted that the Americas were colonised by the Clovis people, who arrived on the continent over the Bering land bridge no longer than 13,500 years ago at the oldest.” According to one of her co-authors, Michael Waters, CFSA Endowed Chair and professor at Texas A&M University, who has been involved in the debate about human settlement of the Americas for many years: “The site is a slam-dunk pre-Clovis site with unequivocal artefacts, clear stratigraphy and thorough dating…The stone tools and faunal remains at the site show that at 14,550 years ago, people knew how to find game, fresh water and material for making tools. These people were well-adapted to this environment.”

Australia: Researchers claim to have found the oldest ground-edge axe

BBC News reported on research about early humans in Australia and their technology as informed by a tiny stone flake found in Western Australia. Archaeologists say it is a remnant of the earliest known axe with a handle; findings appear in the journal Australian Archaeology. The fingernail-sized sliver of basalt is ground smooth at one end and appears to date from 44,000 to 49,000 years ago. Although much older “hand axes,” which are usually made of flint, have been found across Europe and Africa, with one well-known example found on a Norfolk beach thought to be 700,000 years old, those are very different tools. The Australian ground-edge axe appears to be an independent invention of human settlers in Australia, rather than being a derived tradition from earlier populations outside Australia, according to Sue O’Connor, distinguished professor at the Australian National University: “There’s no axes in the islands to our north. They arrived in Australia and innovated axes.” O’Connor first found the piece in the 1990s in a rock shelter called Carpenter’s Gap in the Kimberley region. Such ground-edge axes, which are very labor intensive, are not widespread around the world, according to co-author Peter Hiscock from the University of Sydney.

John Shea, a stone tool expert and professor at Stony Brook University in the U.S. expresses caution: “The evidence is essentially one flake – one piece of stone out of hundreds and hundreds that they’ve excavated from this rock shelter site…They would make a stronger case if they could show that similar chips with edge abrasion occurred at a greater number of sites.” Without more findings, he said there is “still reason for doubt” that it was an axe blade. He added, “But it’s a cool find…”

Quartz carried an interview with primatologist Frans de Waal, C. H. Candler Professor of Primate Behavior at Emory University in Atlanta, about the alpha male model and how it informs modern day politics. De Waal is the author of the noted book, Chimpanzee Politics, which describes power tactics and hierarchy among the world’s largest population of captive chimpanzees who live at the Arnhem Zoo in the Netherlands. De Waal and others have made the Trump-alpha male comparison.

The interview covers topics such as: how apt is the alpha concept to the American presidential race, is it necessarily bad for a leader to exhibit alpha male behavior, and what do nonhuman primate studies say about female election behavior? De Waal is particularly intrigued by the likely upcoming competition between Donald Trump and Hillary Clinton: “That’s the thing that’s really going to interest me in the next phase of the election. You are going to have a female candidate with whom the tactics that may work with men are not going to work. If it gets too rough, there is going to be massive female solidarity. I think that’s already happening.” [Blogger’s note: It is true that the U.S. presidential competition resembles chimpanzee politics far more than bonobo politics, which could hardly be more different from one another — even though bonobos are as closely related to modern humans as are chimpanzees. Picture how bonobos would deal with this conflict: Have sex and then share the contested fruit!].